HOW TO BUY Jenn's Music 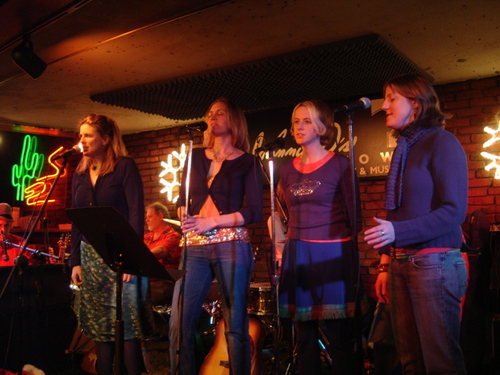 HOW TO BUY THE MUSIC:

MAYBE BABY: WHAT MATTERS 2003
Jennifer's band with Ry Cavanaugh, half her songs, half Ry's.
Available for download slabster or order the disk from cdbaby, or folkweb or hi-n-dry.

WAYFARING STRANGERS: SHIFTING SANDS OF TIME Rounder, 2001
Jennifer is one of several vocalists in this bluegrass/jazz supergroup.
Available at stores everywhere newbury comics

DEMO 1997
Jennifer's first recording of original music - demos for Veering...
Only available for download at slabster and physical copies are at folkweb

THE STORY: GRACE IN GRAVITY Green Linnet, 1991 and
THE STORY: ANGEL IN THE HOUSE Elektra, 1993
Jennifer's band with Jonatha Brooke.
Available in stores everywhere and newbury comics

Thanks to everyone who's come out to shows recently! The four day 'tourlet' I was on this weekend was a blast - Ossippee, NH to Charleston, WV sandwiched Easthampton and New York City. What a pleasure to play with the whole band at Makor! Thank you New Yorkers for showing such a lot of love and support at the show! Sylvie Lewis knocked all our socks off - check out her music if you haven't already. I shared my first show at PACE in Easthampton with Anand Nayak and Polly Fiveash who have a beautiful duo thing going. Ossippee was a triple bill with Bill Morrissey and Tom Dean - much drinking and warming by the fire and laughing at Bill's deadpan humor. Duke Levine has rocked my world once again - we played as a duo on Mountainstage 3/12 - eschewing opportunities to rock with the house band in favor of making our own swirling, angular soup. It was my fourth visit to Mountainstage (three with The Story, one solo) and my first live Solas show - they absolutely blew my mind. Amazing musicianship, songs, stage presence. Listen on your local NPR affiliate starting April 21.

See you on the road,
Jennifer